The National Philharmonic of Ukraine started its concerts seasons in 1863, when the Kyiv Branch of the Imperial Russian Musical Society (ERMS) was founded. At the beginning of the XIX century, the development of the musical art in Kyiv assumes a great  importance. Famous European musicians, as Franz Liszt and Weniawsky brothers, come with recitals to the famous Kyiv Contract Fairs. Thus, the creation of the musical society turned out to be quite timely. Among its initiators and founders were such well known at that time public figures and musicians as R. Pfening, M. Lysenko, P. Seletsky, M. Bogdanov.

The development of the culture and arts in Kyiv at the end of the XIX century was determined by  the economic development of Ukraine. Financial capital was growing, powerful banks were founded. Ukraine becomes the home of sugar magnates and Kyiv - a large trading and economic centre in Europe. Well-off people readily support the arts and spare no means for their flourishing. Churches, theatres, nice mansions are being built. In 1881 the Council of Elders of the Kyiv Merchants Assembly got a permission of the Kyiv City Duma for construction of a stone building for their club.

The Merchants Assembly was allotted the territory of the Kyiv Society of Mineral Waters in the upper part of the Alexander (now Volodymyr) descent at the Tsarist (now European) Square.

The project and supervision of the construction work was carried out by a well-known Kyiv architect Vladimir Nikolaev who at that time held position of the Kyiv municipal and eparchial architect. In 1882 during one construction season a two-stored building of the Merchants Assembly was erected.

The building of the Merchants Assembly quickly gained wide popularity among Kyiv residents. Masked balls, festive family occasions, charitable lotteries, literary and musical evenings were held there. Kyiv musicians and guest performers who played there were delighted with the acoustics of the pillared hall. Nikolaev not only perfectly knew the acoustic laws as an architect but also was a musically gifted person. Several years after the construction of the Merchants Assembly, the Academician of Architecture Vladimir Nikolaev became one of the members of the Directorate of the Kyiv Musical Society. Morning performances of chamber music organised by this society at the beginning of the 20-th century were held at this Merchant's Club.

Many famous names of musical culture figures of Kyiv are connected with the activities of the Musical society. Between 1888 and 1912 Alexander Vinogradsky was a Chairman of the Society. He became famous not only in Kyiv but also in Europe as a unique symphony orchestra conductor. The Kyiv audience is indebted to him by becoming acquainted with many symphonic works of the world classics -those by Beethoven, Tchaikovsky, Rimsky-Korsakov and others. He was an enthusiastic organiser and an expressive Maestro. 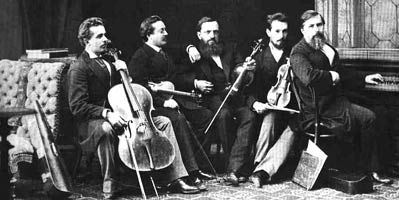 Bright pages of the philharmonic activities in Kyiv are connected with the name of Mykola Lysenko. He went down in history as the founder of the Ukrainian professional musical culture, brilliant composer and performer, public figure devoted to the national idea, promoter in the mater of upbringing the young gifted musicians and nationally-conscious intelligentsia. Back in 1859s he was one of the organisers of the Philharmonic society group. Then he took part in creating the Emperor Russian Musical Society (ERMS). For several years in a row he was elected a member of its Directorate. However, those at the ERMS disapproved Lysenko's national orientation. But he found support in other circles. The Literary-Artistic Association, the Boyan Philharmonic society, the Kyiv Ukrainian Club, which were created with the participation of M. Lysenko, contributed a great deal o the development of the Ukrainian culture.

The 20-th Century had burst into the life violently and rather tragic. But the musical life of Kyiv didn't stop either during the First World War, the civil war, or the period of frequent changes of power. During those years the words by C. Debussy, C. Saint-Sa?ns and others composers were performed in Kyiv. In 1914 the Interlude to the 4-th act of Mykola Lysenko's opera "Taras Bulba" was played by the Symphony Orchestra under the direction of R. Glyer. During those twenty years, appearing with concerts were such performers as S. Rachmaninoff, A. Scriabin, A. Nezhdanova, L. Sobinov, F. Shaliapin and others.

The Merchant's assembly existed till 1919. Later, the building accommodated the Proletarian House of arts, then -the House of Political education, later - the Bolshevik Club and Republican Palace of Pioneers and Schoolchildren.

"On March 2 (in 1923), the concert which was held under direction of L. Steinmberg successfully started the activities of the State Philharmonic" -that's how the event which took place at the former Merchant Assembly was described by its eyewitness, the music expert M. Shipovich who, fortunately had fixed this fact of history. From 1927, the State Philharmonic society worked in Kharkiv, then the capital of Ukraine, and in 1934 it returned to Kyiv which again became the capital city. This creative collective had not constant premises. The concerts and lecture-concerts took place in various halls and workers clubs. In 1937, the State Symphony Orchestra started working under the direction of Nathan Rakhlinat at the State Philharmonic.

At the beginning of the war in 1941, the Kyiv State Philharmonic  stopped its work and the priceless archives were burnt down by order of the top officials. During the occupation of Kyiv, a German officer's club was accommodated in the building of the former Merchant's Assembly. This building was one of the few that escaped destruction unlike the nearby Khreshchatyk Street, which was in ruins.

According to the overall plan for the post-war reconstruction of Khreshchatyk, and after a thorough examination of the building of the former Merchants Assembly, this historic structure had to be razed for it was in a very bad condition. But the building was not ruined since no other better premises with such wonderful acoustics could be found for the philharmonic society in the tumbledown city. The Kyiv Philharmonic started working there already in 1944.

The Lysenko Hall of Columns 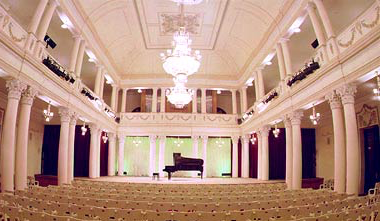 The 1980s were the most difficult years in the history of the Philharmonic . Several misfortunes occurred during that period. One of them resulted in the flooding of the basement. The archives and one of the best music libraries in Kyiv perished. Redecoration could not help any longer. It was necessary to save the building immediately. Finally, thanks to persistence of the Director of the Philharmonic  Dmytro Ostapenko, restoration began. The Ministry of Culture and the Kyiv City Executive Committee were entrusted with carrying out the restoration and reconstruction. The project envisaged to renovate the historic structure of the architectural monument, to preserve the acoustic properties of the Hall of Columns, to install modern technical equipment, namely a control panel for the stage manager, the latest recording devices, an auxiliary telecommunication system, equipment for the stage lighting and mechanisation, etc. The restored Hall of Columns of the National Philharmonic  of Ukraine was opened for the public on December 1996.

On account of is varied creative activities and significant contribution to the development of the Ukraine musical art, the Kyiv State Philharmonic  was granted the status of the National Philharmonic of Ukraine by Decree of the President of Ukraine in October, 1994.

Concert activity of Philharmonic has gained new bloom after its renewal and reconstruction.

Now, creative composition of the Philharmonic includes 19 People's and 32 Honoured Artists of Ukraine, 6 Honoured Personalities of Arts, 5 Honoured Workmen of Culture of Ukraine, many laureates of International and Ukrainian contests, 11 artistic groups which increase the glory of Ukrainian national culture. In 1995 the Symphony Orchestra of the National Philharmonic of Ukraine was created

The National Philharmonic of Ukraine, alongside with its active concert activity aiming broad propaganda of domestic and foreign art, classical heritage, reviving Ukrainian national culture, constantly conducts international contests and festivals (Contest of young pianists of Vladimir Krainev, Contest in memory of Vladimir Horowitz and others). It takes part in national and international artistic projects, presentations, creative reports, in artistic-cultural and public events at participation of leaders of the State and Government, in scientifically-practical conferences, exhibitions etc.

The concert hall of the National Philharmonic  of Ukraine has revived in order to add new interesting pages to the musical history of Ukraine.